A strong network of friends and supporters is essential to a healthy career and a happy life, and research repeatedly shows that the single best predictor of whether a candidate will get the job is whether he or she already knows someone who works at the target company. Do you know how to network?

You’re not alone. When we hear the word “network,” most of us are like....

Why? Because the way we usually think of networking just feels kinda smarmy.

The conventional conception of networking is that it’s transactional. It's something you do because you need help. And—as human beings—we don't like to feel like we're using people. We want genuine relationships that are built on mutual trust, affinity, and generosity.

If you’re approaching networking as something you have to do to forward your career and get what you want, you’re inherently using people. That’s the bottom line. The current networking paradigm is about utility, not connection.

Let's see if we can change that. 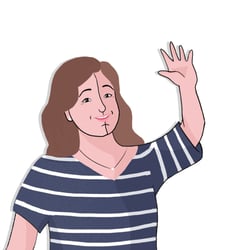 I'm Angela. I'm a business woman, an entrepreneur, and an introvert. So I've spent A LOT of time thinking about networking and how to make it suck less.

And I’ve got 5 key tips that will shift your view on networking and start you on your way to becoming a superconnector with a thriving network of awesome professional friends. When you approach networking from a different paradigm, it stops sucking and actually becomes an activity that enriches your life in unimagined ways. And you’ll never have to look far for any career opportunity, because your network will be right there.

So without further ado…

Common sense tells you that you can count on your friends and that you can’t ask too much of strangers. So put your agenda aside with strangers until they become friends. This means that even if you have a genuine personal agenda (like, “I need a job in the next two months!!”), you have to set it aside when you’re meeting new people and focus on making a genuine connection. If someone is going to be useful to your career, the time to discuss that is in a second, third, or fourth interaction.

#2. Ditch that elevator pitch, too.

Elevator Pitches are uncomfortable for EVERYONE, including the people you’re trying to impress. The Elevator Pitch really only exists to compel the listener to say “yes” to a big Ask (and to do so while you are basically impolitely intruding on their space without permission).

If you're an entrepreneur or you need to sell something—like a process, product, or service—please learn how to Elevator Pitch that thing. But if the thing you are introducing is yourself, stop it! You are not an idea, a product, a service, or a project. You’re a complete human being, and an Elevator Pitch at best is selling you short.

It’s REALLY important to master small talk so that you can engage in a group networking conversation, go with the flow, listen and contribute, but not feel the need to hijack the discussion to focus on yourself. That will give the opposite impression from the one you want to leave.

There’s a proper time to introduce your own ideas into a situation or conversation, and it will soon be your turn to share your own experiences. But as it turns out, listening first makes a better impression—it respects people who are already conversing, shows that you have a sense of humility and an interest in others, and enables other speakers to share their enthusiasm, which is an experience we all love to have.

#4. When introducing yourself: Be enthusiastic. (genuine enthusiasm only, please)

Let’s talk about that moment when someone turns to you and says, “Tell me about yourself!” or “What do you do?” Or that moment when the group looks at you, and you know it’s your turn to introduce yourself.

The key to introducing yourself to anyone anywhere and engendering a real connection lies in one concept: Enthusiasm.

Well, first of all, don’t take this moment to recite a canned speech of any kind. Connect on the basis of positive emotion instead of cold, hard facts (like all those skills and accomplishments or bragging rights). Letting your natural enthusiasm come through will positively affect everyone else around you, because enthusiasm is contagious. So introduce yourself using something you’re enthusiastic about!

Part of successful networking involves staying in the present moment and making the most of it. It means listening to others, being yourself, and creating a meaningful connection. But all of that won’t matter if the connection doesn’t survive beyond your first contact.

Giving the connection a future is the easiest part of the networking process, but it also causes a lot of anxiety for people.

To create a future for any connection, you need just two things: A way to contact them, and a context for the next step.

It’s completely natural to ask someone for their contact information if you made a connection. It doesn’t obligate them to give you a job or to do you any favors. It also doesn’t obligate you to ask for a job or a favor. It simply enables the relationship to have a future.

But beyond their contact info, you also need a reason and the person’s permission to follow up. The best way to do this is to stick to something that keeps the conversation going on the path it started: Did you discuss the local restaurant scene? Propose lunch at your favorite spot or promise to send a list of your top 5 dinner restaurants. Did you discuss their work? Ask if you can follow up and do an informational interview.

As with all things, don’t force it.

If you can’t think of a single specific next step to give your connection a future, then just keep it simple: “I would really love to stay in touch. Would you mind if I reach out to you in the next few weeks?” If your connection agrees, then follow up in whatever way seems natural.

And there you have it: my top tips for networking like a pro!

If you want more advice about how to network with integrity or be that star superconnector, check out my new book: How to Network without Feeling Like an A-Hole. Available on Amazon in December!!